Eileen graduated with a B.A. from Saint Anselm College, and received an M.S. from American University. She wrote about her ancestors’ participation in the colonization of Nobles County, Minnesota in “‘An Invitation to the Land’: Reconstructing James and Eliza Conlon’s Migration to Minnesota,” which was published in the Summer 2011 issue of American Ancestors magazine. Eileen's interests include Irish and 19th century New England research. View all posts by Eileen Pironti → 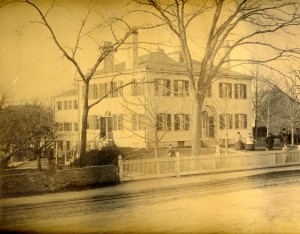 A few months ago, my husband and I moved to Dorchester, Massachusetts, to work as caretakers of the William Clapp house, which was built in 1806. William Clapp and his wife, Elizabeth (Humphreys) Clapp, were married in the parlor of this house on 15 December 1806. They had nine children, two of whom died at a young age. This family also suffered the loss of three more children in November of 1838 from typhoid fever. Rebecca Clapp, aged twenty, and James Clapp, aged nineteen, died on the same day, and their brother Alexander Clapp, aged seventeen, died four days later. END_OF_DOCUMENT_TOKEN_TO_BE_REPLACED

As a genealogist, when I hear the word “tree” I typically think of family trees, not the outdoor variety used for shade on a sunny day. However, I came across an interesting newspaper article about a gentleman named James Raymond Simmons who gave a lecture on trees at the New England Historic Genealogical Society one hundred years ago. Simmons, who served as secretary-forester of the New York State Forestry Association and assistant state forester of Massachusetts, described trees as “the oldest living witness of our past history.”[1] He compiled a list of Massachusetts trees and their connection to people and historic events, which he included in his book The Historic Trees of Massachusetts.[2] Although a few of his examples have tenuous connections, I appreciate the message Simmons attempted to convey to his audience. END_OF_DOCUMENT_TOKEN_TO_BE_REPLACED

In November of 1844, five men “organized themselves into a society for historical and genealogical research” in Boston, Massachusetts.[1] The New England Historic Genealogical Society (NEHGS) was incorporated the following March. Prior to the society’s incorporation, several additional members were elected, the first being the Reverend Lucius Robinson Paige on 21 January 1845.[2] At the time of his death on 2 September 1896, he was the oldest member of NEHGS.[3] While the distinction of being the first member of NEHGS is noteworthy, his accomplishments during his lifetime are also worth a closer look. END_OF_DOCUMENT_TOKEN_TO_BE_REPLACED I noted in a previous blog post that my husband Paul and I are live-in caretakers at the William Clapp House in Dorchester, Massachusetts. This house was built in 1806 and serves as the headquarters of the Dorchester Historical Society. Paul and I assist the Society with special events, and we give tours of the house and grounds. The Clap name can be found in Dorchester records dating back to the 1630s – the surname is often spelled with one “p” for earlier generations of this family. END_OF_DOCUMENT_TOKEN_TO_BE_REPLACED

A few months ago, my husband and I moved to Dorchester, Massachusetts, to work as caretakers of the William Clapp house, which was built in 1806. William Clapp and his wife, Elizabeth (Humphreys) Clapp, were married in the parlor of this house on 15 December 1806. They had nine children, two of whom died at a young age. This family also suffered the loss of three more children in November of 1838 from typhoid fever. Rebecca Clapp, aged twenty, and James Clapp, aged nineteen, died on the same day, and their brother Alexander Clapp, aged seventeen, died four days later. END_OF_DOCUMENT_TOKEN_TO_BE_REPLACED

When the movie Seabiscuit (2003) was released in theaters, my family and I decided to throw our own version of a Hollywood movie premiere party. Seabiscuit was a well-known racehorse during years of the Depression. My mother’s paternal aunt, Agnes Conlon, was the wife of John “Red” Pollard, a jockey who rode Seabiscuit in a number of races. I saw the movie with fifteen of my relatives, followed by a get-together at my aunt and uncle’s home. Although my great-aunt Agnes was not included in the storyline of this movie, it was fun to watch Tobey Maguire portray my great-uncle Red.

Red Pollard and Seabiscuit were viewed by many as underdogs. Pollard suffered various injuries throughout his racing career, including an injury which resulted in blindness in his right eye. He kept that a secret, out of fear that he would not be allowed to ride. END_OF_DOCUMENT_TOKEN_TO_BE_REPLACED

Recently I uncovered some interesting information about my husband’s great-grandfather, Peter Consigli. According to the 6 September 1930 Boston Herald,[1] federal agents from Boston carried out several raids in the town of Milford, Massachusetts, and arrested three men, including Peter, for the manufacture of liquor. According to my husband and father-in-law, no one in their family had ever mentioned this incident.

END_OF_DOCUMENT_TOKEN_TO_BE_REPLACED

One day while visiting my parents, I looked through some documents that belonged to my maternal grandmother, Gertrude Rose (Breen) Conlon. She lived with my family for two years until her death in 1992, and my mother still has some of her papers. While searching for a copy of my grandmother’s marriage record, I came across what appeared to be a bank book. Upon closer examination, I noticed that it was a payment book for my grandmother’s account with the Massachusetts Catholic Order of Foresters (MCOF) . I recognized the name of this organization from research I previously conducted on the Irish lines of my family. My great-great-grandfather, James Conlon, was a member of the MCOF until his death in 1934. END_OF_DOCUMENT_TOKEN_TO_BE_REPLACED

My interest in genealogy was sparked by a request from my father: he wanted my help in finding information on his paternal grandparents. My father did not know their names, but he had heard that they were from Ireland. My grandfather died when I was young, and his only living sibling didn’t want to talk to us about her parents because it was “all in the past,” so I began my search by obtaining a copy of my grandfather’s birth record. I couldn’t wait to tell my dad the names of his father’s parents, which were listed on that birth record: Thomas Curley and Margaret Glennon. END_OF_DOCUMENT_TOKEN_TO_BE_REPLACED Municipal annual reports provide a breakdown of various city and town department budgets and expenditures for the year. At first glance it may seem that these publications would not be useful for genealogical research, but taking the time to search these reports for information about your ancestors may lead to some interesting discoveries about their lives and the lives of their contemporaries. Many of these reports include a roster of municipal employees and their annual salaries. For example, the 1887 edition of City of Somerville (Massachusetts) Annual Reports contains information submitted by a number of departments, including the School Committee.[1] Their report includes a table listing the school teachers who worked in Somerville that year, their salaries, and the year they were hired. END_OF_DOCUMENT_TOKEN_TO_BE_REPLACED